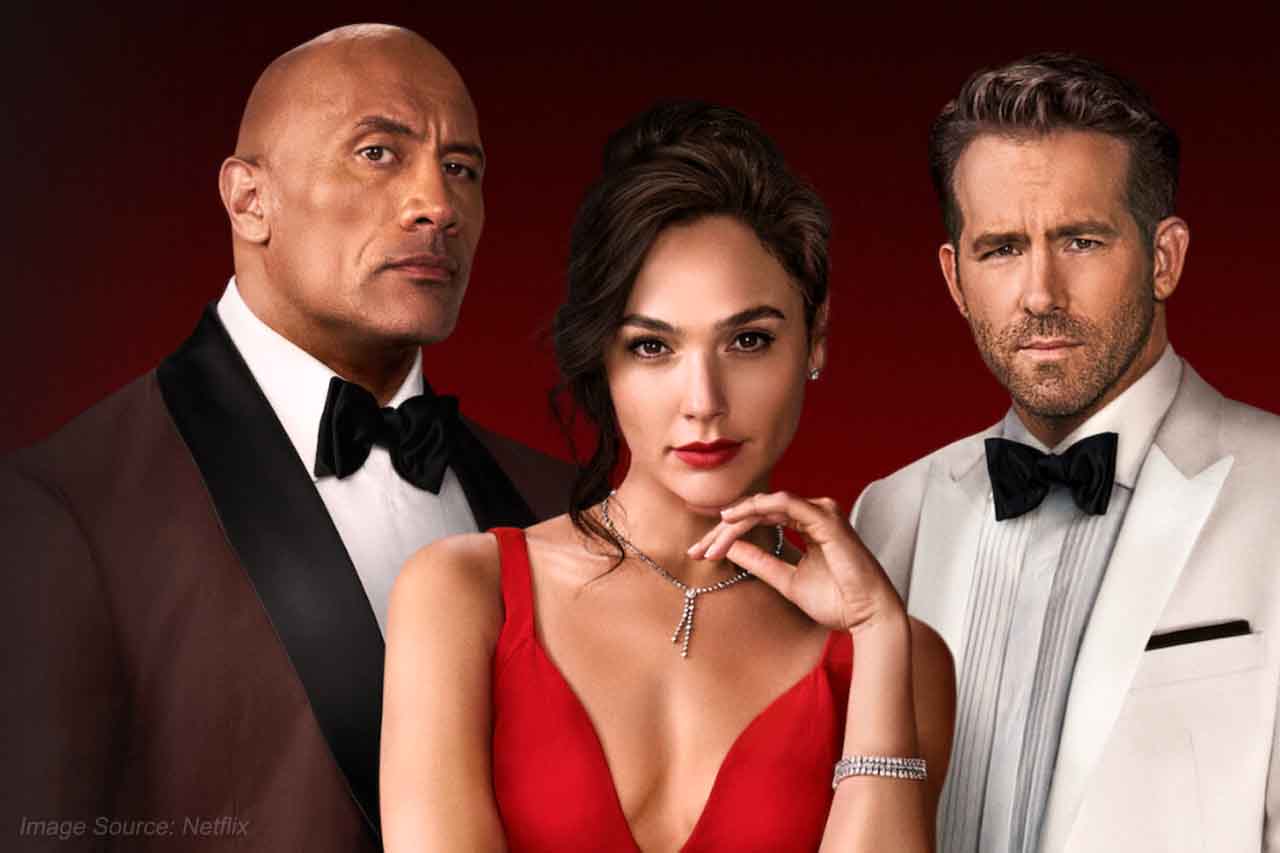 Let’s talk Red Notice, Netflix’s newest $200 million action comedy written and directed by Rawson Marshall Thurber, who has previously given us films like Central Intelligence and Skyscraper. This movie tells the story of a heist surrounding Cleopatra’s eggs surrounding an FBI profiler and two of the most skilled thieves in the world. But let’s be honest—you’re not going to watch this movie because you think the premise is interesting. You’re going to watch this movie because of the three A-listers attached to the front of it. Let’s go through them, shall we?

Our leading man is Dwayne “The Rock” Johnson, in all of his pectoral glory. When he shows up in a movie, you can expect punches, signature smolders with a possible eyebrow raise and a lot of baby oil. Of course, we also have Ryan Reynolds, our favorite Canadian, who we know from films like Green Lantern and Blade: Trinity. When he shows up, you can expect wisecracks, sarcasm, and just the right amount of obnoxiousness. But our trio wouldn’t be complete without Gal Gadot, the graceful presence behind Wonder Woman, who plays the antagonist of this film.

Take these three movie stars, mix them together, and you have Red Notice, a perfectly watchable action movie that succeeds in what it wants to do. This is an enjoyable movie that mainly gets anchored by the performances of our three magnetic leads. Perhaps the best thing about this movie is that it is aware of what it is and doesn’t try to be anything more, and Thurber has had a career where this movie is right down his alleyway.

Red Notice wraps you into its story fast, establishing the premise surrounding Cleopatra’s three eggs. Reynolds portrays Nolan Booth, a skilled thief with a big mouth trying to steal the eggs. Johnson plays Agent John Hartley with a few wink-at-the-camera moments as characters often notice that Johnson doesn’t quite look like a guy with a regular job like a profiler. After the film’s opening chase, Hartley arrests Nolan, but he soon finds himself framed for his role in a heist committed by The Bishop (Gadot), another thief out to steal all the eggs.

From here, the film goes where you would expect. After being put in the same prison cell as Nolan, Hartley must work with him to clear his name and get the egg before The Bishop can. Would I be lying if I said it wasn’t fun? Yes. This movie’s occasional generic feel doesn’t prevent the film from entertaining, especially in the action sequences that can be exciting and fun, albeit ridiculous. Throughout the film, Thurber handles the characters and the action quite well, knowing when to give them their backstory and having that backstory inform who they’ve become.

Everything leads to a fun final action setpiece that prominently features all three stars. However, the final moments of the film can feel frustrating as Thurber tries a bit too hard to pull the rug out from under the audience while also setting up the possibility of a sequel. The film doesn’t entirely stick the landing, but for the most part, it works. And with three likable actors at the center doing their schtick, it’s pretty hard to go wrong because this is an easily digestible action heist film where you can kick your socks off, grab some popcorn, and enjoy on Netflix.

Prisoners of the Ghostland “Detonate” | A Shudder Exclusive

Special Look | Under the Helmet: The Legacy of Boba Fett | Disney+